Awards and Distinctions We Received 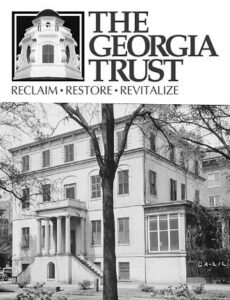 *Projects prior to 2010 were for projects undertaken while employed at John Milner Associates, Inc.

Aeon was instrumental in the rehabilitation project of the Freedom Tower at Miami Dade College. Their knowledge and skills were the centerpiece that ensured the high quality of the exterior restoration works the building needed. We are all proud of the result of the rehabilitation of the Freedom Tower and its significance to the citizens of Miami. Alfonso and Aeon were an asset to the team. -Andy Leon, Project Manager, Facilities Department, Miami Dade College

Florida Trust for Historic Preservation presented the award for Outstanding Achievement in Restoration/Rehabilitation to Miami Dade College and the project team. The awards ceremony held at the University of Florida in Gainesville. The project team included Kaufman Lynn Contractors, Rodriguez & Quiroga Architects, and Aeon Preservation Services LLC. Aeon principal Alfonso Narvaez was on hand to receive the award and also served as a speaker in a workshop profiling the project and the role of architectural conservators in large scale projects. This award follows several other awards the project has received, including the Association of Building Contractors Florida East Chapter Excellence in Construction Eagle Award, and the Dade Heritage Trust 2012 preservation award. 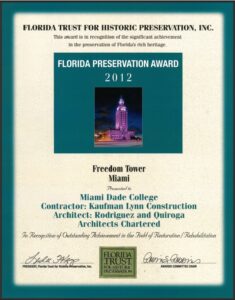 Aeon was instrumental in making the Miami Freedom Tower Restoration a success. Their technical knowledge and expertise, combined with his extensive background in architectural history were critical on this project. The entire project team relied heavily on Alfonso to guide us through this complex project, to communicate difficult technical restoration concepts to the project Owner, and to keep us on schedule. Most importantly, however, Alfonso was able to balance the demands of a historic restoration project with the reality of the Owner’s budget to provide them with the very best value for their investment. I look forward to someday working together again with Alfonso and Aeon Preservation Services. -Ben Baffer, VP Operations, Kaufman Lynn Construction